Vibrocompaction is probably the oldest dynamic deep compaction method in existence. It was introduced and developed in 1936 in Germany.

The method enables the compaction of non-cohesive soils to be give excellent results. A detailed description of the method may be found in literature.

The method is simply densifying the soil by a deep single or double vibration probes that are hung by a crane. The measure of densification may be the settlement gained at top of ground surface and the gain in bearing capacity may be assessed through a zone load test and the improvement in soil properties is assessed by performing CPT test prior and after compaction.

It is possible for settlement of the surface to range from 5% to 15% of the compaction depth. This range depends on the density prior to compaction, as well as the targeted degree of compaction.

This method is different than the conventional stone columns where the soil is drilled with boring machines and the borings filled with stones. 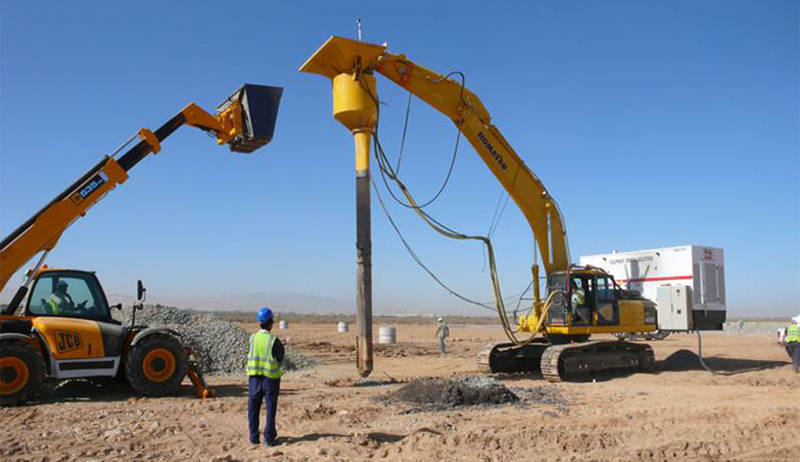 On the other hand, the wet vibroreplacement method is used for cohesive soils where a heavy water jet flushes the soil and allows a room for the replacement.

APCC has great capacity in carrying out Vibrocompaction and Vibroreplacement works. With more than 50 probes and many well-trained personnel, the company can improve millions of square meters without outsourcing. The ground improvements for Palm Deira and Palm Jebel Ali in Dubai were carried out entirely by APCC.